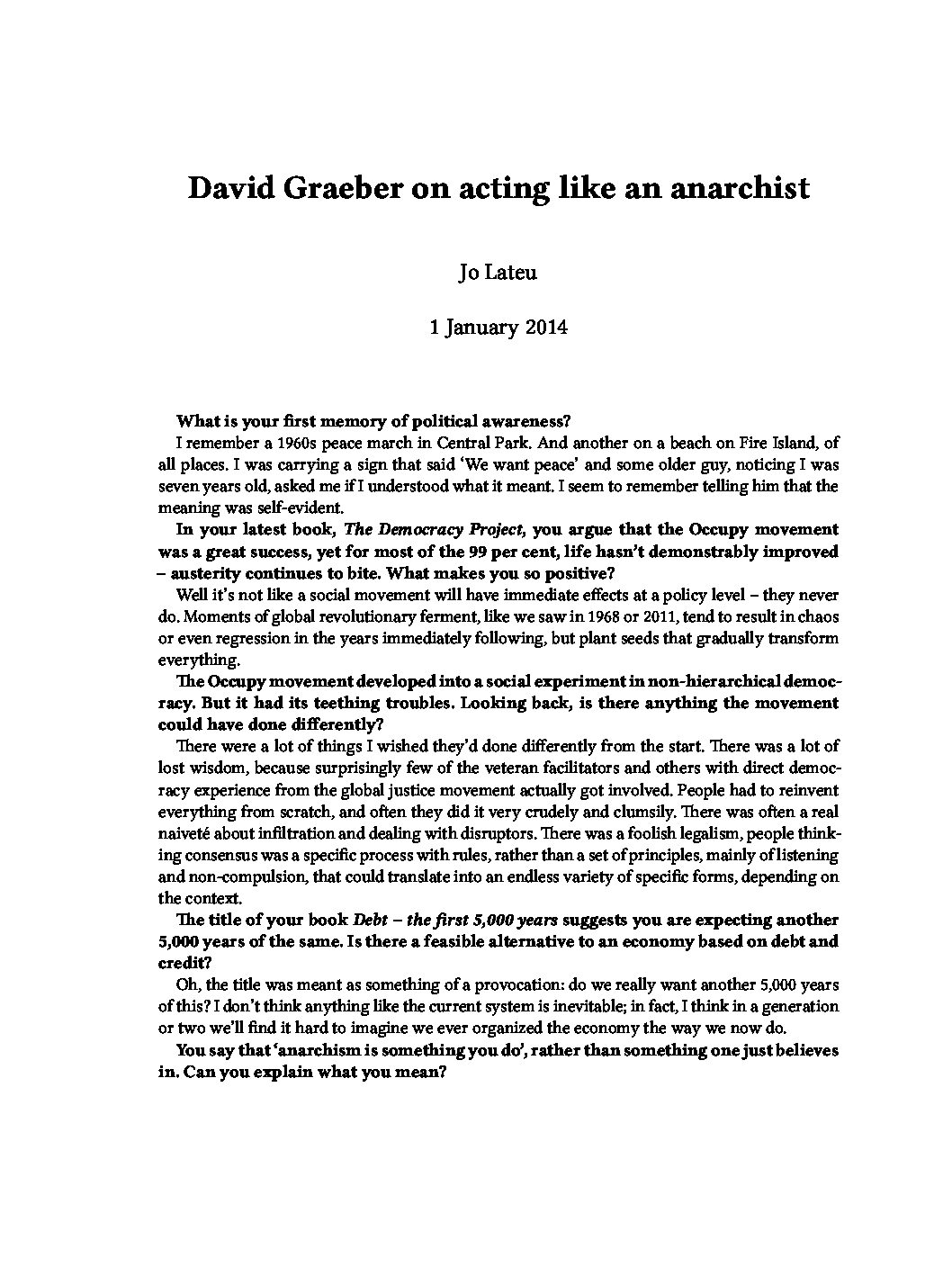 What is your first memory of political awareness?

I remember a 1960s peace march in Central Park. And another on a beach on Fire Island, of all places. I was carrying a sign that said ‘We want peace’ and some older guy, noticing I was seven years old, asked me if I understood what it meant. I seem to remember telling him that the meaning was self-evident.

In your latest book, The Democracy Project, you argue that the Occupy movement was a great success, yet for most of the 99 per cent, life hasn’t demonstrably improved – austerity continues to bite. What makes you so positive?

Well it’s not like a social movement will have immediate effects at a policy level – they never do. Moments of global revolutionary ferment, like we saw in 1968 or 2011, tend to result in chaos or even regression in the years immediately following, but plant seeds that gradually transform everything.

The Occupy movement developed into a social experiment in non-hierarchical democ- racy. But it had its teething troubles. Looking back, is there anything the movement could have done differently?

There were a lot of things I wished they’d done differently from the start. There was a lot of lost wisdom, because surprisingly few of the veteran facilitators and others with direct democ- racy experience from the global justice movement actually got involved. People had to reinvent everything from scratch, and often they did it very crudely and clumsily. There was often a real naiveté about infiltration and dealing with disruptors. There was a foolish legalism, people think- ing consensus was a specific process with rules, rather than a set of principles, mainly of listening and non-compulsion, that could translate into an endless variety of specific forms, depending on the context.

The title of your book Debt – the first 5,000 years suggests you are expecting another 5,000 years of the same. Is there a feasible alternative to an economy based on debt and credit?

Oh, the title was meant as something of a provocation: do we really want another 5,000 years of this? I don’t think anything like the current system is inevitable; in fact, I think in a generation or two we’ll find it hard to imagine we ever organized the economy the way we now do.

You say that ‘anarchism is something you do’, rather than something one just believes in. Can you explain what you mean?

I’ve always observed that Marxism is basically a theoretical discourse about revolutionary strategy; and anarchism, basically an ethical one about revolutionary practice. Look at the way people divide themselves up. On the Marxist side you have Leninists, Maoists, Trotskyists… All named after some intellectual leader who produced a body of strategic analysis. On the anarchist side you have syndicalists, communists, individualists, insurrectionists – all the divisions are over tactics and forms of organization. I’m not saying it’s totally meaningless to say you’re an anarchist if it’s not in any way reflected in your practice; you can look forward to a world without states and capitalism in the abstract, believe it would be better and possible, but not do anything about it. But it doesn’t really mean much. On the other hand, it’s possible to act like an anarchist

Having lived on both sides of the Atlantic, do you see more hope for democratic and social change in the US or in Britain? Why?

It’s very hard to say. There is a certain stoic masochism in Britain that I find very hard to understand. It’s as if large swathes of the working population have simply had the spirit beaten out of them. But it’s also possible Britain has weathered the worst and is poised to come out the other side. I’m still trying to figure it out – I’m a relative newcomer. The US is a collapsing empire. Key institutions, like the educational system, are in free-fall and most remaining vestiges of democracy are being stripped away. There’s much more anger, I think, but also more outright repression.