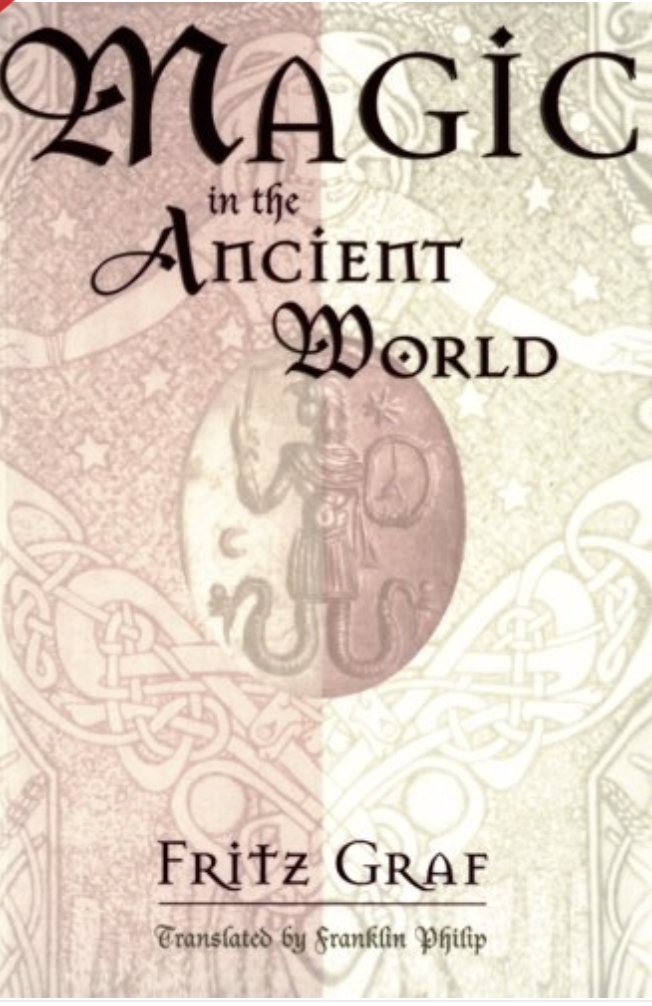 Review of  Magic in the Ancient World,

Thessalian witches, it was said, would regularly make threats against the cosmos: if the gods didn’t do their bidding they would blot out the sun and pluck the moon from the sky like an eye out of its socket. Under the Roman Empire, magicians claimed to have gods frequently over for dinner, and a popular rumor had it that Christ himself was just a magician—who, after many years of study in the secret chambers beneath Egyptian temples, had learned the true names of several important angels. They thereby became his slaves and enabled him to perform miracles.

It is, perhaps, not surprising that serious scholars have had a hard time deciding what to say about this sort of thing.

It’s especially hard for Classicists, most of whom ignore ancient magic entirely. Classicists, after all, are likely to be drawn to their field by an admiration for ancient philosophy, or art, or simply an attraction to what used to be called the classical temper, with its rationality, balance, and hatred of excess. Not surprising then they tend to shun those areas of ancient life which are most obviously irrational, unbalanced and excessive. This is probably the reason why the last serious attempt at an overall history of magic in the ancient world was written by Pliny the Elder, sometime around 77 AD.

Magic in the Ancient World, by Fritz Graf, a Swiss classicist, would then seem to be filling a very definite gap. And it is, indeed, a very good book, full of insights. It’s also a rather frustrating one—especially for a non-Classicist. The author seems to presume a reader who not only already knows what, say, the hermetic tradition or theurgy is, but one who already has opinions about them. The story he has to tell has to be teased out from a series of often technical arguments. Still, it can be. And it’s a fascinating story.

It begins in the 5th century BC, a time which saw the arrival in Greece of a slew of “beggar priests” (as Plato called them) from the Middle East, wandering curers who also carried with them hitherto unknown Assyrian and Babylonian techniques for “binding” one’s enemies. They were particularly well received in Periclean Athens, which—during the time of Socrates, Euripides, and the rest—witnessed a veritable boom of sorcery, with thousands of citizens sneaking to cemeteries at night armed with lead tablets and wax figurines in order to send ghosts to tie the tongues of those likely to testify against them in law suits. Athenian philosophers and doctors were quick to seize on such beggar priests as the epitome of all they were against. The theologically inclined attacked them for believing the gods

would ever allow mere mortals to tell them what to do; materialists, for believing gods had anything to do with natural processes to begin with. They labeled them “magi”, after the official priestly caste of the Persian Empire—which a few probably were, or at least claimed to be. It was the perfect slur, since Persians were for the Greeks the quintessential bad guys, and worse, the quintessential losers (if their spells were so powerful, why had they failed so miserably when they tried to conquer Greece? In ancient Israel, by contrast, the Persians were the good guys, having freed the Jews from exile in Babylon. Hence the three kindly magi of the New Testament.)

In Roman times, “magus” remained largely a term of abuse. For most intellectuals, it meant charlatans who used their tricks to wow the ignorant country folk and gull them of their money. But as time went on, the term was picked up by a sort of counterculture of self-proclaimed magicians—which might include anyone from teenage philosophy students in search of kicks to wandering hucksters and fairground showmen, purveying claims to miraculous knowledge from the East. A literature developed. Secret books of purportedly Egyptian, Jewish, and Assyrian lore were copied and passed on. It was the beginning of a tradition—with its demons and pentagrams—which would continue through the Middle Ages, all the way to the likes of Aleister Crawley and the Golden Dawn, not to mention providing endless material for low-grade horror fantasies in the junk culture of just about every subsequent period of European history.

Graf keeps the focus mainly on this secret literature: on the actual texts of the lead tablets deposited in tombs, or of spells recorded on Egyptian papyri. One chapter is concerned with showing how little literary representations of magic had to do with the real thing. But in a way this is also the book’s greatest weakness. After all, if one wants to understand the social significance of magic (which presumably is, ultimately, the point) what magicians actually do is not nearly so important as what people think they do. Graf does acknowledge this—magicians, he notes, are created by public opinion—but even here he is so determined not to sensationalize his topic that he ends up robbing it of much of its substance. After all, magic is pretty much inherently sensationalistic. If it can’t amaze and titillate, what power does it have?

It’s not really Graf’s fault. Really it’s the fault of social theory. There just isn’t any worthwhile theory of magic out there to apply. Like most historians, he dutifully turns to anthropology for insights; but anthropological theories of magic—I am myself an anthropologist, so I can say this—hit a dead end years ago, and they do not serve him well.

19th century anthropologists had an attitude almost identical to that of most ancient intellectuals: magic was simply a collection of impostures and mistakes. Most twentieth century anthropological literature on the subject then has consisted in trying to find some way to avoid this conclusion.

It isn’t easy. After all, presented with a person who claims to be able to cast lightning, it is very difficult to avoid the conclusion that this is not true; and that therefore, the person in question is either deluded, or a liar. The usual solution is to focus on the word ‘true’. Magical statements are not meant to be taken literally. When a witch threatens to pluck out the moon, this is a poetic statement, a ‘performative speech act’, a form of expressive communication, a kind of trope. Magical acts are really intended to have effects not on the physical world, but on a human audience. Surely this approach can be useful, but there are obvious objections. The most obvious: what if there isn’t any audience? With most magic, and almost all ancient magic, the actual ritual is done in secret. By accepting anthropological theory, Graf is ultimately forced to the conclusion that most ancient magic wasn’t social at all: it was about the magician’s personal relationship with the gods.

The problem is that for most of ancient history, this was obviously untrue. In Greece, under the early Empire, magic was a major instrument of politics—public figures were always having their houses searched for hidden dolls and tablets. So the author is forced to reformulate: actually, it was only under the late Empire, when the state became increasingly bureaucratic and authoritarian, and politics restricted to a tiny elite, that magic became, as it were, New Age-ified, until in the end it simply became a matter of concern for the magician’s “spiritual welfare”.

But what about when magic was political? It’s here that theory fails us. So allow me to offer a suggestion. What’s missing from most accounts is a serious consideration of two factors which always seem surround magic, in the popular imagination: scepticism, and fear. I doubt many Thessalian peasants believed that witches could really pluck out the moon; but probably most suspected anyone who made such claims might be capable of something fairly terrible. They might have been sceptical about the witches, but they were equally sceptical about philosophers who would assure them such people had no powers whatsoever. Why take chances?

It’s this factor of intimidation which I suspect explains the relation with state politics. In ancient Rome, when the state clamped down, magic effectively disappeared. I witnessed almost the exact opposite phenomena in rural Madagascar. Madagascar had, for most of this century, been under the grip of a typical colonial police state. Over the course of the ‘70s and ‘80s, the state abandoned the countryside entirely. The police disappeared completely. By 1990, just about everyone had become a magician of some sort or another—or more accurately, perhaps, was willing to insinuate they might be. The result was a society where it was considered elementary common sense that one should be very polite to strangers because you never know who might know how to blast you with lightning, wither your crops or render your children insane. This general uncertainty produced a remarkable degree of social peace.

There were professional magicianss, too: astrologers, mediums, curers. Everyone assumed that most were frauds; that most of their amazing effects (eating glass, sucking out objects from under peoples’ skins..) were mere stage illusions; most of those who claimed to be able to cast lightning, simply liars. (Even so, one would hardly be wise to go about provoking such a person.) This is what anthropologists have discovered just about everywhere. Traditionally, anthropologists have not found all this scepticism particularly interesting: the point, they always say, is that few deny that the genuine item does, somewhere, exist. I think it’s very interesting. After all, consider what one is saying when one says a magician is a fraud. One is saying that there are some people who clearly are powerful and influential, but whose power is really based on nothing other than their ability to convince others that they have it. Is this not a profound insight into the nature of social power? In fact, I suspect this is the real reason social theorists feel uncomfortable acknowledging this political aspect of magic—or perhaps, in talking about magic at all. Magic captures something of the essence of political power: the fact that there is always something paradoxical, circular, and just a little bit stupid about the whole thing.

The power of magicians, I am suggesting, is simply a slightly more outrageous, smalltime carnival version of the kind held by kings and consuls: a power which strives to both seduce and terrify, wielded by figures who try to entertain their audience with preposterous lies at the same time as constantly, tacitly trying to insinuate that, if challenged,. they could also annhilate them—and probably wouldn’t scruple much to do so. A power which many suspect (rightly) comes down to little more than an ability to convince others it exists, but just possibly, might be something more than that. No wonder real politicians the world over tend to have the same reaction to such people: either, like the Persian emperors, they adopt them as assistants, or if not, the urge is always to do as so many Roman ones: to have them expelled from the city, clapped in irons, or put to death. The only emperor who dabbled in magic himself, as far as we know, was Nero (a great lover of theatrical effects). He was sufficiently curious to have himself initiated by a genuine Persian magus. After a while, though, he grew bored of it: apparently, because he realized there was no power magic could give him that he didn’t already have.