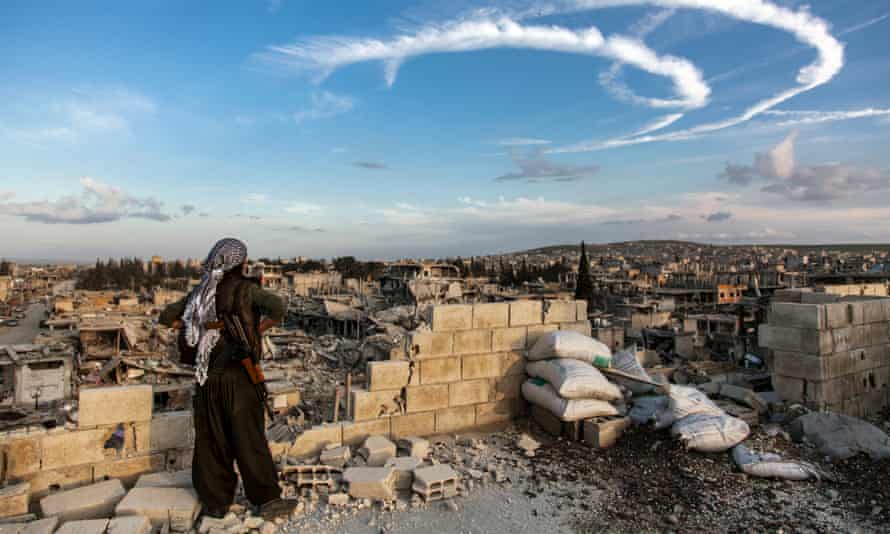 Remember those plucky Kurdish forces who so heroically defended the Syrian city of Kobane from Isis? They risk being wiped out by Nato.

The autonomous Kurdish region of Rojava in Northeast Syria, which includes Kobane, faces invasion. A Nato army is amassing on the border, marshaling all the overwhelming firepower and high-tech equipment that only the most advanced military forces can deploy. The commander in chief of those forces says he wants to return Rojava to its “rightful owners” who, he believes, are Arabs, not Kurds.

Last spring, this leader made similar declarations about the westernmost Syrian Kurdish dis- trict of Afrin. Following that, the very same Nato army, using German tanks and British heli- copter gunships, and backed by thousands of hardcore Islamist auxiliaries, overran the district. According to Kurdish news agencies, the invasion led to over a 100,000 Kurdish civilians being driven out of Afrin entirely. They reportedly employed rape, torture and murder as systematic means of terror. That reign of terror continues to this day. And the commander and chief of this Nato army has suggested that he intends to do to the rest of North Syria what he did to Afrin.

I am speaking, of course, of president Recep Tayyip Erdoğan, who is, increasingly, Turkey’s effective dictator. But it’s crucial to emphasize that these are Nato forces. This not only means they are supplied with state-of-the-art weaponry; it also means those weapons are being maintained by other Nato members.

Fighter jets, helicopter gunships, even Turkey’s German-supplied Panzer forces – they all de- grade extremely quickly under combat conditions. The people who continually inspect, maintain, repair, replace, and provide them with spare parts tend to be contractors working for American, British, German or Italian firms. Their presence is critical because the Turkish military advan- tage over Northern Syria’s “People’s Defense Forces” (YPG) and “Women’s Defense Forces” (YPJ), those defenders of Kobane that Turkey has pledged to destroy, is entirely dependent on them.

That’s because, aside from its technological advantage, the Turkish army is a mess. Most of its best officers and even pilots have been in prison since the failed coup attempt in 2016, and it’s now being run by commanders chosen by political loyalty instead of competence. Rojava’s defenders, in contrast, are seasoned veterans. In a fair fight, they would have no more problem fending off a Turkish incursion than they had driving back Turkish-backed Jihadis in the past.

A “fair fight” in this case would mean having access to anti-tank and anti-air weapons. But this is precisely what the Trump administration promised Turkey it would not let the Kurds have. Even those forces directly working with the US and British troops to defeat Islamic State were never to receive the defensive weapons needed to fend off the Turkish air and armored assault that would inevitably follow – which, if Afrin is anything to go by, may be backed by napalm and cluster bombs.

The moment those forces are withdrawn, however, their former allies will be sitting ducks, unable to defend themselves against the advanced weaponry that Britain and the US themselves help provide to Turkey and maintain.

Typically, the western media treats Turkey as some kind of peculiar rogue state whose periodic outbursts of violence directed at Kurdish civilians – the bombing and destruction of its own south- eastern cities in 2015, the reported ethnic cleansing of Afrin, and the ongoing attacks on villages in Iraq – must be tolerated lest it aligns with enemies like Iran or Russia. Similarly, pundits and politicians seem to whistle and look the other way as Erdoğan arrests or jails tens of thousands of people, including teachers, journalists and elected parliamentarians for saying things he doesn’t like – or even when or even when he publicly declares that “no European in any part of the world can walk safely on the streets” if they defy him.

But Turkey is not a rogue state. Turkey is Nato. Its army guards Europe’s eastern flank. Its police and security forces are charged with halting the flow of refugees from Middle Eastern wars to Europe – which increasingly involves opening fire with machine guns on refugees at the border – a service for which it is paid millions of euros in direct compensation.

It is only because Turkey is a member of Nato that its government managed to have the Kur- dish guerrillas of the PKK (the Kurdish Worker’s Party), the guerrilla insurgents that have been fighting for autonomy in south-east Turkey since the 1990s, placed on the “international terror list” in 2004, at precisely the moment the PKK renounced demands for a separate state and of- fensive operations and attempted to enter into peace negotiations. It should be noted that this “terror” designation applies almost exclusively among Nato countries; the PKK is certainly not listed as a “terror” organization by the United Nations, India, China or even Switzerland.

It is because Turkey is Nato that the western press has to take seriously its bizarre claims that the experiment in feminist democracy underway in Rojava is itself a form of “terrorism”.

It is because Turkey is Nato, and guards Europe’s borders, that the US and European powers looked the other way or even expressed support when its army descended on the hitherto peace- ful enclave of Afrin, in violation of all international law. As the Turkish army did so, it suggested it would not just to ethnically cleanse the Kurdish population and put an end to their own ex- periment with feminist democracy, but also to use the district to resettle the families of the most avid Islamist rebels who might otherwise have migrated to Europe.

It is because Turkey is Nato that the western press feels obliged to play along with the charade that it is an enemy of Isis, despite endless evidence of active Turkish collaboration with Isis, and the fact, known to everyone in the region, that Turkish “offensives” against Isis in Syria have largely consisted of bribing Isis commanders to switch sides.

As a result, we are left with the bizarre spectacle of “former” al-Qaida and Isis Jihadis working with Erdogan to fight the YPG as part of a 100,000-strong mercenary force. In addition, men like Seyf Ebu Bekir, who was an Isis commander when it was carrying out its notorious Paris nightclub massacres, are now commanders in the Turkey-backed Free Syrian Army. For his part,

If all this is difficult to comprehend, it’s partly because so many of us – including many who fancy themselves “anti-imperialists” – seem to have forgotten how empires actually work. The British empire didn’t send British troops into combat very often either. Nato powers are arming and maintaining the security forces of their official ally, Turkey, to fly its Nato planes and drive its Nato tanks and shoot at refugees, in the same way Turkey is reportedly employing al-Qaida and Isis legions to do its dirty work of human wave attacks and ethnic cleansing. We have de- fanged the terrorists by, effectively, putting them on retainer, in much the same way Rome once employed Alaric the Goth, or the US, Osama bin Laden. And we know how well that worked out. There are alternatives. International powers could lift the de facto Nato embargo that prevents the forces that defeated Isis from defending themselves. There are calls for an international no-fly zone, preferably on the authority of the UN security council, enforced by a country other than America – possibly France, or even Russia. This too would allow the YPG/J to fight on equal terms. Rojava’s defenders are perfectly capable of fending off the Turkish army if that army’s high tech advantage is neutralized.

In the long run, the Turkish government needs to stop reacting to those who have a different vision of how life could be lived by trying to murder them, and return to the peace table. The same could be said for Syria, where Rojava’s decentralized model could be key to resolving the conflict.

But for now, we need an urgent response to the risk faced by Kurds in Rojava. The situation is growing more dire by the day – and it is quite possible that Nato will soon conduct one of the worst genocidal massacres of the 21st century.