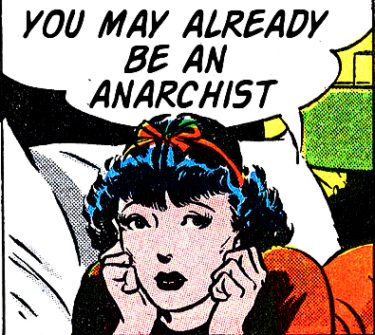 Chances are you have already heard something about who anarchists are and what they are supposed to believe. Chances are almost everything you have heard is nonsense. Many people seem to think that anarchists are proponents of violence, chaos, and destruction, that they are against all forms of order and organization, or that they are crazed nihilists who just want to blow everything up. In reality, nothing could be further from the truth. Anarchists are simply people who believe human beings are capable of behaving in a reasonable fashion without having to be forced to. It is really a very simple notion. But it’s one that the rich and powerful have always found extremely dangerous.

At their very simplest, anarchist beliefs turn on to two elementary assumptions. The first is that human beings are, under ordinary circumstances, about as reasonable and decent as they are allowed to be, and can organize themselves and their communities without needing to be told how. The second is that power corrupts. Most of all, anarchism is just a matter of having the courage to take the simple principles of common decency that we all live by, and to follow them through to their logical conclusions. Odd though this may seem, in most important ways you are probably already an anarchist — you just don’t realize it.

Let’s start by taking a few examples from everyday life.

If there’s a line to get on a crowded bus, do you wait your turn and refrain from elbowing your way past others even in the absence of police?

If you answered “yes”, then you are used to acting like an anarchist! The most basic anarchist principle is self-organization: the assumption that human beings do not need to be threatened with prosecution in order to be able to come to reasonable understandings with each other, or to treat each other with dignity and respect.

Everyone believes they are capable of behaving reasonably themselves. If they think laws and police are necessary, it is only because they don’t believe that other people are. But if you think about it, don’t those people all feel exactly the same way about you? Anarchists argue that almost all the anti-social behavior which makes us think it’s necessary to have armies, police, prisons, and governments to control our lives, is actually caused by the systematic inequalities and in- justice those armies, police, prisons and governments make possible. It’s all a vicious circle. If people are used to being treated like their opinions do not matter, they are likely to become an- gry and cynical, even violent — which of course makes it easy for those in power to say that their opinions do not matter. Once they understand that their opinions really do matter just as much as anyone else’s, they tend to become remarkably understanding. To cut a long story short: anarchists believe that for the most part it is power itself, and the effects of power, that make people stupid and irresponsible.

Are you a member of a club or sports team or any other voluntary organization where decisions are not imposed by one leader but made on the basis of general consent?

If you answered “yes”, then you belong to an organization which works on anarchist principles! Another basic anarchist principle is voluntary association. This is simply a matter of applying democratic principles to ordinary life. The only difference is that anarchists believe it should be possible to have a society in which everything could be organized along these lines, all groups based on the free consent of their members, and therefore, that all top-down, military styles of organization like armies or bureaucracies or large corporations, based on chains of command, would no longer be necessary. Perhaps you don’t believe that would be possible. Perhaps you do. But every time you reach an agreement by consensus, rather than threats, every time you make a voluntary arrangement with another person, come to an understanding, or reach a compromise by taking due consideration of the other person’s particular situation or needs, you are being an anarchist — even if you don’t realize it.

Anarchism is just the way people act when they are free to do as they choose, and when they deal with others who are equally free — and therefore aware of the responsibility to others that entails. This leads to another crucial point: that while people can be reasonable and considerate when they are dealing with equals, human nature is such that they cannot be trusted to do so when given power over others. Give someone such power, they will almost invariably abuse it in some way or another.

Do you believe that most politicians are selfish, egotistical swine who don’t really care about the public interest? Do you think we live in an economic system which is stupid and unfair?

If you answered “yes”, then you subscribe to the anarchist critique of today’s society — at least, in its broadest outlines. Anarchists believe that power corrupts and those who spend their entire lives seeking power are the very last people who should have it. Anarchists believe that our present economic system is more likely to reward people for selfish and unscrupulous behavior than for being decent, caring human beings. Most people feel that way. The only difference is that most people don’t think there’s anything that can be done about it, or anyway — and this is what the faithful servants of the powerful are always most likely to insist — anything that won’t end up making things even worse.

But what if that weren’t true?

And is there really any reason to believe this? When you can actually test them, most of the usual predictions about what would happen without states or capitalism turn out to be entirely untrue. For thousands of years people lived without governments. In many parts of the world people live outside of the control of governments today. They do not all kill each other. Mostly they just get on about their lives the same as anyone else would. Of course, in a complex, urban, technological society all this would be more complicated: but technology can also make all these problems a lot easier to solve. In fact, we have not even begun to think about what our lives could be like if technology were really marshaled to fit human needs. How many hours would we really need to work in order to maintain a functional society — that is, if we got rid of all the useless or destructive occupations like telemarketers, lawyers, prison guards, financial analysts, public relations experts, bureaucrats and politicians, and turn our best scientific minds away from working on space weaponry or stock market systems to mechanizing away dangerous or annoying tasks like coal mining or cleaning the bathroom, and distribute the remaining work among everyone equally? Five hours a day? Four? Three? Two? Nobody knows because no one is even asking this kind of question. Anarchists think these are the very questions we should be asking.

Do you really believe those things you tell your children (or that your parents told you)?

“It doesn’t matter who started it.” “Two wrongs don’t make a right.” “Clean up your own mess.” “Do unto others…” “Don’t be mean to people just because they’re different.” Perhaps we should decide whether we’re lying to our children when we tell them about right and wrong, or whether we’re willing to take our own injunctions seriously. Because if you take these moral principles to their logical conclusions, you arrive at anarchism.

Take the principle that two wrongs don’t make a right. If you really took it seriously, that alone would knock away almost the entire basis for war and the criminal justice system. The same goes for sharing: we’re always telling children that they have to learn to share, to be considerate of each other’s needs, to help each other; then we go off into the real world where we assume that everyone is naturally selfish and competitive. But an anarchist would point out: in fact, what we say to our children is right. Pretty much every great worthwhile achievement in human history, every discovery or accomplishment that’s improved our lives, has been based on cooperation and mutual aid; even now, most of us spend more of our money on our friends and families than on ourselves; while likely as not there will always be competitive people in the world, there’s no reason why society has to be based on encouraging such behavior, let alone making people compete over the basic necessities of life. That only serves the interests of people in power, who want us to live in fear of one another. That’s why anarchists call for a society based not only on free association but mutual aid. The fact is that most children grow up believing in anarchist morality, and then gradually have to realize that the adult world doesn’t really work that way. That’s why so many become rebellious, or alienated, even suicidal as adolescents, and finally, resigned and bitter as adults; their only solace, often, being the ability to raise children of their own and pretend to them that the world is fair. But what if we really could start to build a world which really was at least founded on principles of justice? Wouldn’t that be the greatest gift to one’s children one could possibly give?

Do you believe that human beings are fundamentally corrupt and evil, or that certain sorts of people (women, people of color, ordinary folk who are not rich or highly educated) are inferior specimens, destined to be ruled by their betters?

Now, you might object that all this is well and good as a way for small groups of people to get on with each other, but managing a city, or a country, is an entirely different matter. And of course there is something to this. Even if you decentralize society and put as much power as possible in the hands of small communities, there will still be plenty of things that need to be coordinated, from running railroads to deciding on directions for medical research. But just because something is complicated does not mean there is no way to do it democratically. It would just be complicated. In fact, anarchists have all sorts of different ideas and visions about how a complex society might manage itself. To explain them though would go far beyond the scope of a little introductory text like this. Suffice it to say, first of all, that a lot of people have spent a lot of time coming up with models for how a really democratic, healthy society might work; but second, and just as importantly, no anarchist claims to have a perfect blueprint. The last thing we want is to impose prefab models on society anyway. The truth is we probably can’t even imagine half the problems that will come up when we try to create a democratic society; still, we’re confident that, human ingenuity being what it is, such problems can always be solved, so long as it is in the spirit of our basic principles — which are, in the final analysis, simply the principles of fundamental human decency.