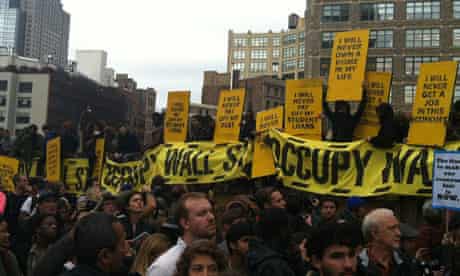 As the history of past movements all make clear, nothing terrifies those running America more than the danger of true democracy breaking out. As we see in Chicago, Portland, Oakland, and right now in New York City, the immediate response to even a modest spark of democratically organised civil disobedience is a panicked combination of concessions and brutality. Our rulers, anyway, seem to labor under a lingering fear that if any significant number of Americans do find out what anarchism really is, they may well decide that rulers of any sort are unnecessary.

Almost every time I’m interviewed by a mainstream journalist about OWS, I get some variation of the same lecture:

“How are you going to get anywhere if you refuse to create a leadership structure or make a practical list of demands? And what’s with all this anarchist nonsense – the consensus, the sparkly fingers … ? You’re never going to be able to reach regular, mainstream Americans with this sort of thing!”

It is hard to imagine worse advice. After all, since 2007, just about every previous attempt to kick off a nationwide movement against Wall Street took exactly the course such people would have recommended – and failed miserably. It is only when a small group of anarchists in New York decided to adopt the opposite approach – refusing to recognise the legitimacy of the existing political authorities by making demands of them; refusing to accept the legitimacy of the existing legal order by occupying a public space without asking for permission, refusing to elect leaders that could then be bribed or co-opted; declaring, however non-violently, that the entire system was corrupt and they rejected it; being willing to stand firm against the state’s inevitable violent response – that hundreds of thousands of Americans from Portland to Tuscaloosa began rallying in support, and a majority declared their sympathies.

This is not the first time a movement based on fundamentally anarchist principles – direct action, direct democracy, a rejection of existing political institutions and attempt to create al- ternative ones – has cropped up in the US. The civil rights movement (at least, its more radical branches), the anti-nuclear movement, the global justice movement … all took similar directions. Never, however, has one grown so startlingly quickly.

To understand why, we have to understand that there’s always been an enormous gap be- tween what those ruling America mean by “democracy”, and what that word means to almost anyone else. According to the official version, of course, “democracy” is a system created by the founding fathers, based on checks and balances between president, Congress and judiciary. In fact, nowhere in the Declaration of Independence or Constitution does it say anything about the US being a “democracy”. Most defined democracy as collective self-governance by popular assemblies, and as such, they were dead set against it, arguing it would be prejudicial against the interests of minorities (the particular minority that was had in mind here being the rich). They only came to redefine their own republic – modeled not on Athens, but on Rome – as a “democracy” because ordinary Americans seemed to like the word so much.

But what did, and what do, ordinary Americans mean by the word? A system where they get to weigh in on which politicians will run the government? This is what we’re always told, but it seems implausible. After all, most Americans loathe politicians, and tend to be skeptical about the very idea of government. If they universally hold it out as a political ideal, it can only be because the American people still sees it, however vaguely, as self-governance – as what the founding fathers tended to denounce as either “democracy” or, as they sometimes also put it, “anarchy”.

If nothing else, this would help explain the enthusiasm with which Americans have embraced a movement based on directly democratic principles, despite the uniformly contemptuous dis- missal of America’s media and political class. Most Americans are, politically, deeply conflicted. They tend to combine a deep reverence for freedom with a carefully inculcated, but nonetheless real identification with the army and police. Few are actual anarchists; few even know what “anar- chism” means. It is not clear how many would ultimately wish to discard the state and capitalism entirely.

But one thing overwhelming numbers of Americans do feel is that something is terribly wrong with their country, that its key institutions are controlled by an arrogant elite, that radical change of some kind is long since overdue. They’re right. It’s hard to imagine a political system so sys- tematically corrupt – one where bribery, on every level, has been made completely legal. The outrage is appropriate. The problem was, up until 17 September, the only side of the spectrum willing to propose radical solutions of any sort was the right. But Occupy Wall Street has changed that: democracy has broken out.