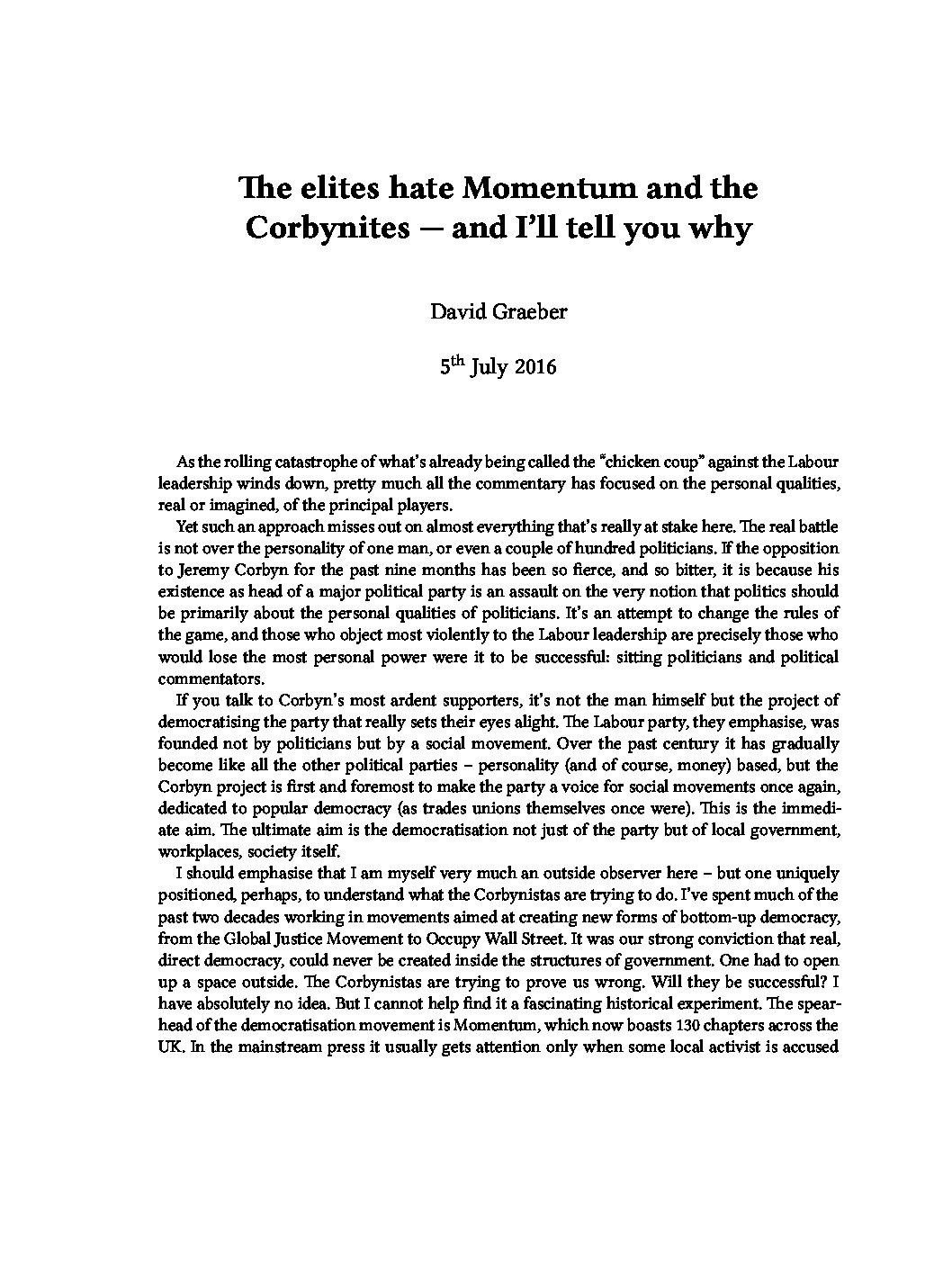 As the rolling catastrophe of what’s already being called the “chicken coup” against the Labour leadership winds down, pretty much all the commentary has focused on the personal qualities, real or imagined, of the principal players.

Yet such an approach misses out on almost everything that’s really at stake here. The real battle is not over the personality of one man, or even a couple of hundred politicians. If the opposition to Jeremy Corbyn for the past nine months has been so fierce, and so bitter, it is because his existence as head of a major political party is an assault on the very notion that politics should be primarily about the personal qualities of politicians. It’s an attempt to change the rules of the game, and those who object most violently to the Labour leadership are precisely those who would lose the most personal power were it to be successful: sitting politicians and political commentators.

If you talk to Corbyn’s most ardent supporters, it’s not the man himself but the project of democratising the party that really sets their eyes alight. The Labour party, they emphasise, was founded not by politicians but by a social movement. Over the past century it has gradually become like all the other political parties – personality (and of course, money) based, but the Corbyn project is first and foremost to make the party a voice for social movements once again, dedicated to popular democracy (as trades unions themselves once were). This is the immedi- ate aim. The ultimate aim is the democratisation not just of the party but of local government, workplaces, society itself.

I should emphasise that I am myself very much an outside observer here – but one uniquely positioned, perhaps, to understand what the Corbynistas are trying to do. I’ve spent much of the past two decades working in movements aimed at creating new forms of bottom-up democracy, from the Global Justice Movement to Occupy Wall Street. It was our strong conviction that real, direct democracy, could never be created inside the structures of government. One had to open up a space outside. The Corbynistas are trying to prove us wrong. Will they be successful? I have absolutely no idea. But I cannot help find it a fascinating historical experiment. The spear- head of the democratisation movement is Momentum, which now boasts 130 chapters across the UK. In the mainstream press it usually gets attention only when some local activist is accused of “bullying” or “abuse” against their MP – or worse, suggests the possibility that an MP who systematically defies the views of membership might face deselection.

The real concern is not any justified fear among the Labour establishment of bullying and in- timidation – the idea that the weak would bully the strong is absurd. It is that they fear being made truly accountable to those they represent. They also say that while so far they have been forced to concentrate on internal party politics, the object is to move from a politics of account- ability to one of participation: to create forms of popular education and decision-making that allow community groups and local assemblies made up of citizens of all political stripes to make key decisions affecting their lives.

There have already been local experiments: in Thanet, the council recently carried out an exer- cise in “participatory economic planning” – devolving budgetary and strategic decisions to the community at large – which shadow chancellor John McDonnell has hailed as a potential model for the nation. There is talk of giving consultative assemblies real decision-making powers, of “banks of radical ideas” to which anyone can propose policy initiatives and, especially in the wake of the coup, a major call to democratise the internal workings of the party itself. It may all seem mad. Perhaps it is. But more than 100,000 new Labour members are already, to one degree or another, committed to the project.

If nothing else, understanding this makes it much easier to understand the splits in the party after the recent rebellion within the shadow cabinet. Even the language used by each side reflects basically different conceptions of what politics is about. For Corbyn’s opponents, the key word is always “leadership” and the ability of an effective leader to “deliver” certain key constituencies. For Corbyn’s supporters “leadership” in this sense is a profoundly anti-democratic concept. It assumes that the role of a representative is not to represent, not to listen, but to tell people what to do.

For Corbynistas, in contrast, the fact that he is in no sense a rabble rouser, that he doesn’t seem to particularly want to be prime minister, but is nonetheless willing to pursue the goal for the sake of the movement, is precisely his highest qualification. While one side effectively accuses him of refusing to play the demagogue during the Brexit debate, for the other, his insistence on treating the public as responsible adults was the quintessence of the “new kind of politics” they wished to see.

What all this suggests is the possibility that the remarkable hostility to Corbyn displayed by even the left-of-centre media is not due to the fact they don’t understand what the movement that placed him in charge of the Labour party is ultimately about, but because, on some level, they actually do.

After all, insofar as politics is a game of personalities, of scandals, foibles and acts of “leader- ship”, political journalists are not just the referees – in a real sense they are the field on which the game is played. Democratisation would turn them into reporters once again, in much the same way as it would turn politicians into representatives. In either case, it would mark a dramatic decline in personal power and influence. It would mark an equally dramatic rise in power for unions, constituent councils, and local activists – the very people who have rallied to Corbyn’s support.