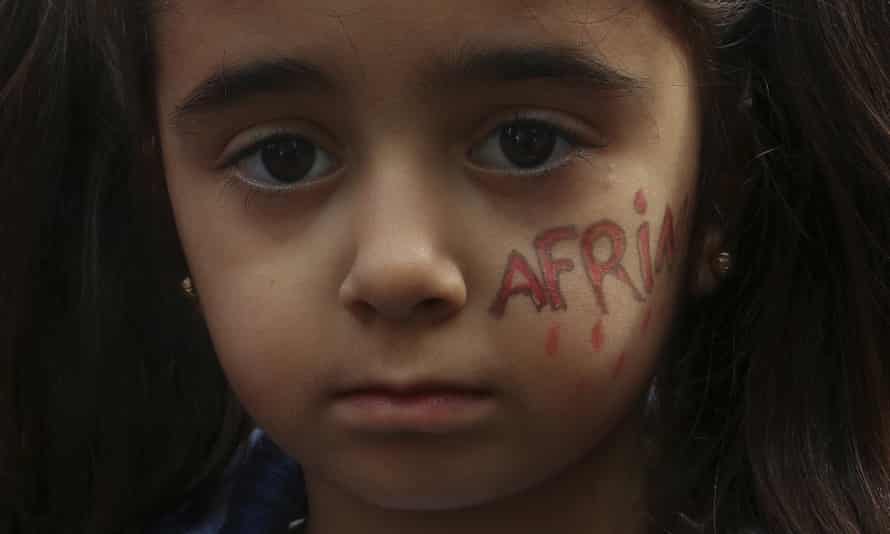 Three years ago the world watched a ragtag band of men and women fighters in the Syrian town of Kobane, most armed only with Kalashnikovs, hold off a vast army of Islamist militants with tanks, artillery and overwhelming logistical superiority. The defenders insisted they were acting in the name of revolutionary feminist democracy. The Islamist fighters vowed to exter- minate them for that very reason. When Kobane’s defenders won, it was widely hailed as the closest one can come, in the contemporary world, to a clear confrontation of good against evil.

Today, exactly same thing is happening again. Except this time, world powers are firmly on the side of the aggressors. In a bizarre twist, those aggressors seem to have convinced key world leaders and public opinion-makers that Kobane’s citizens are “terrorists” because they embrace a radical version of ecology, democracy and women’s rights.

The region in question is Afrin, defended by the same YPG and YPJ (People’s Protection and Women’s Protection Units) who defended Kobane, and who afterwards were the only forces in Syria willing to take the battle to the heartland of Islamic State, losing thousands of combatants in the battle for its capital, Raqqa.

An isolated pocket of peace and sanity in the Syrian civil war, famous only for the beauty of its mountains and olive groves, Afrin’s population had almost doubled during the conflict as hun- dreds of thousands of mostly Arab refugees had come to shelter with its original, overwhelmingly Kurdish population.

At the same time its inhabitants had taken advantage of their peace and stability to develop the democratic principles embraced throughout the majority Kurdish regions of north Syria, known as Rojava. Local decisions were devolved to neighbourhood assemblies in which everyone could participate; other parts of Rojava insisted on strict gender parity, with every office having co- chairs, male and female, in Afrin, two-thirds of public offices are held by women.

Today, this democratic experiment is the object of an entirely unprovoked attack by Islamist militias including Isis and al-Qaida veterans, and members of Turkish death squads such as the notorious Grey Wolves, backed by the Turkish army’s tanks, F16 fighters, and helicopter gun- ships. Like Isis before them, the new force seems determined to violate all standards of behaviour, launching napalm attacks on villagers, attacking dams – even, like Isis, blowing up irreplaceable archaeological monuments. Recep Tayyip Erdoğan, the president of Turkey, has announced, “We aim to give Afrin back to its rightful owners”, in a thinly veiled warning to ethnically cleanse the region of its Kurdish inhabitants. And only today it emerged that a convoy heading to Afrin carrying food and medicine was shelled by Turkish forces.

Graphic of the region.

Remarkably, the YPG and YPJ have so far held off the invaders. But they have done so without so much as the moral support of a single major world power. Even the US, the presence of whose forces prevents Turkey from invading those territories in the east, where the YPG and YPJ are still engaged in combat with Isis, has refused to lift a finger to defend Afrin. The British foreign secretary Boris Johnson has gone so far as to insist that “Turkey has the right to want to keep its borders secure” – by which logic he would have no objection if France were to seize control of Dover.

The result is bizarre. Western leaders who regularly excoriate Middle Eastern regimes for their lack of democratic and women’s rights – even, as George W Bush famously did with the Taliban, using it as justification for military invasion – appear to have decided that going too far in the other direction is justifiable grounds for attack.

To understand how this happened, one must go back to the 1990s, when Turkey was engaged in a civil war with the military arm of the Kurdistan Workers’ party, or PKK, then a Marxist- Leninist organisation calling for a separate Kurdish state. Whether the PKK was ever a terrorist organisation, in the sense of bombing marketplaces and the like, is very much a matter of con- tention, but there is no doubt that the guerrilla war was a bloody business, and terrible things happened on both sides. About the turn of the millennium, the PKK abandoned the demand for a separate state. It called a unilateral ceasefire, pressing for peace talks to negotiate both regional autonomy for Kurds and a broader democratisation of Turkish society.

This transformation affected the Kurdish freedom movement across the Middle East. Those inspired by the movement’s imprisoned leader, Abdullah Öcalan, began calling for a radical de- centralisation of power and opposition to ethnic nationalism of all sorts.

The Turkish government responded with an intense lobbying campaign to have the PKK des- ignated a “terrorist organisation” (which it had not been before). By 2001 it had succeeded, and the PKK was placed on the EU, US, and UN “terror list”.

Never has such a decision so wreaked havoc with the prospect of peace. It allowed the Turkish government to arrest thousands of activists, journalists, elected Kurdish officials – even the lead- ership of the country’s second largest opposition party – all on claims of “terrorist” sympathies, and with barely a word of protest from Europe or America. Turkey now has more journalists in prison than any other country.

The designation has created a situation of Orwellian madness, allowing the Turkish govern- ment to pour millions into western PR firms to smear anyone who calls for greater civil rights as “terrorists”. Now, in the final absurdity, it has allowed world governments to sit idly by while Turkey launches an unprovoked assault on one of the few remaining peaceful corners of Syria – even though the only actual connection its people have to the PKK is an enthusiasm for the phi- losophy of its imprisoned leader Öcalan. It cannot be denied – as Turkish propagandists endlessly point out – that portraits of Öcalan, and his books, are common there. But ironically what that philosophy consists of is simply an embrace of direct democracy, ecology, and a radical version of women’s empowerment.

The religious extremists who surround the current Turkish government know perfectly well that Rojava doesn’t threaten them militarily. It threatens them by providing an alternative vision of what life in the region could be like. Above all, they feel it is critical to send the message to women across the Middle East that if they rise up for their rights, let alone rise up in arms, the likely result is that they will be maimed and killed, and none of the major powers will raise an objection. There is a word for such a strategy. It’s called “terrorism” – a calculated effort to cause terror. The question is, why is the rest of the world cooperating?