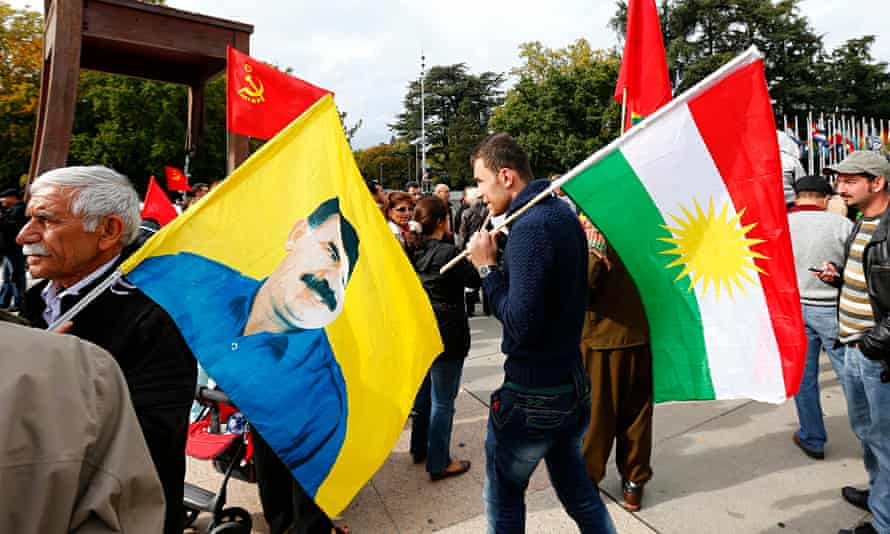 In 1937, my father volunteered to fight in the International Brigades in defence of the Spanish Republic. A would-be fascist coup had been temporarily halted by a worker’s uprising, spear- headed by anarchists and socialists, and in much of Spain a genuine social revolution ensued, leading to whole cities under directly democratic management, industries under worker control, and the radical empowerment of women.

Spanish revolutionaries hoped to create a vision of a free society that the entire world might follow. Instead, world powers declared a policy of “non-intervention” and maintained a rigorous blockade on the republic, even after Hitler and Mussolini, ostensible signatories, began pouring in troops and weapons to reinforce the fascist side. The result was years of civil war that ended with the suppression of the revolution and some of a bloody century’s bloodiest massacres.

I never thought I would, in my own lifetime, see the same thing happen again. Obviously, no historical event ever really happens twice. There are a thousand differences between what happened in Spain in 1936 and what is happening in Rojava, the three largely Kurdish provinces of northern Syria, today. But some of the similarities are so striking, and so distressing, that I feel it’s incumbent on me, as someone who grew up in a family whose politics were in many ways defined by the Spanish revolution, to say: we cannot let it end the same way again.

The autonomous region of Rojava, as it exists today, is one of few bright spots – albeit a very bright one – to emerge from the tragedy of the Syrian revolution. Having driven out agents of the Assad regime in 2011, and despite the hostility of almost all of its neighbours, Rojava has not only maintained its independence, but is a remarkable democratic experiment. Popular assemblies have been created as the ultimate decision-making bodies, councils selected with careful ethnic balance (in each municipality, for instance, the top three officers have to include one Kurd, one Arab and one Assyrian or Armenian Christian, and at least one of the three has to be a woman), there are women’s and youth councils, and, in a remarkable echo of the armed Mujeres Libres (Free Women) of Spain, a feminist army, the “YJA Star” militia (the “Union of Free Women”, the star here referring to the ancient Mesopotamian goddess Ishtar), that has carried out a large proportion of the combat operations against the forces of Islamic State.

How can something like this happen and still be almost entirely ignored by the international community, even, largely, by the International left? Mainly, it seems, because the Rojavan revolutionary party, the PYD, works in alliance with Turkey’s Kurdish Worker’s Party (PKK), a Marxist guerilla movement that has since the 1970s been engaged in a long war against the Turkish state. Nato, the US and EU officially classify them as a “terrorist” organisation. Meanwhile, leftists largely write them off as Stalinists.

But, in fact, the PKK itself is no longer anything remotely like the old, top-down Leninist party it once was. Its own internal evolution, and the intellectual conversion of its own founder, Abdullah Ocalan, held in a Turkish island prison since 1999, have led it to entirely change its aims and tactics.

The PKK has declared that it no longer even seeks to create a Kurdish state. Instead, inspired in part by the vision of social ecologist and anarchist Murray Bookchin, it has adopted the vision of “libertarian municipalism”, calling for Kurds to create free, self-governing communities, based on principles of direct democracy, that would then come together across national borders – that it is hoped would over time become increasingly meaningless. In this way, they proposed, the Kurdish struggle could become a model for a wordwide movement towards genuine democracy, co-operative economy, and the gradual dissolution of the bureaucratic nation-state.

Since 2005 the PKK, inspired by the strategy of the Zapatista rebels in Chiapas, declared a unilateral ceasefire with the Turkish state and began concentrating their efforts in developing democratic structures in the territories they already controlled. Some have questioned how seri- ous all this really is. Clearly, authoritarian elements remain. But what has happened in Rojava, where the Syrian revolution gave Kurdish radicals the chance to carry out such experiments in a large, contiguous territory, suggests this is anything but window dressing. Councils, assemblies and popular militias have been formed, regime property has been turned over to worker-managed co-operatives – and all despite continual attacks by the extreme rightwing forces of Isis. The re- sults meet any definition of a social revolution. In the Middle East, at least, these efforts have been noticed: particularly after PKK and Rojava forces intervened to successfully fight their way through Isis territory in Iraq to rescue thousands of Yezidi refugees trapped on Mount Sinjar after the local peshmerga fled the field. These actions were widely celebrated in the region, but remarkably received almost no notice in the European or North American press.

Now, Isis has returned, with scores of US-made tanks and heavy artillery taken from Iraqi forces, to take revenge against many of those same revolutionary militias in Kobane, declaring their intention to massacre and enslave – yes, literally enslave – the entire civilian population. Meanwhile, the Turkish army stands at the border preventing reinforcements or ammunition from reaching the defenders, and US planes buzz overhead making occasional, symbolic, pinprick strikes – apparently, just to be able to say that it did not do nothing as a group it claims to be at war with crushes defenders of one of the world’s great democratic experiments.

If there is a parallel today to Franco’s superficially devout, murderous Falangists, who would it be but Isis? If there is a parallel to the Mujeres Libres of Spain, who could it be but the courageous women defending the barricades in Kobane? Is the world – and this time most scandalously of all, the international left – really going to be complicit in letting history repeat itself?