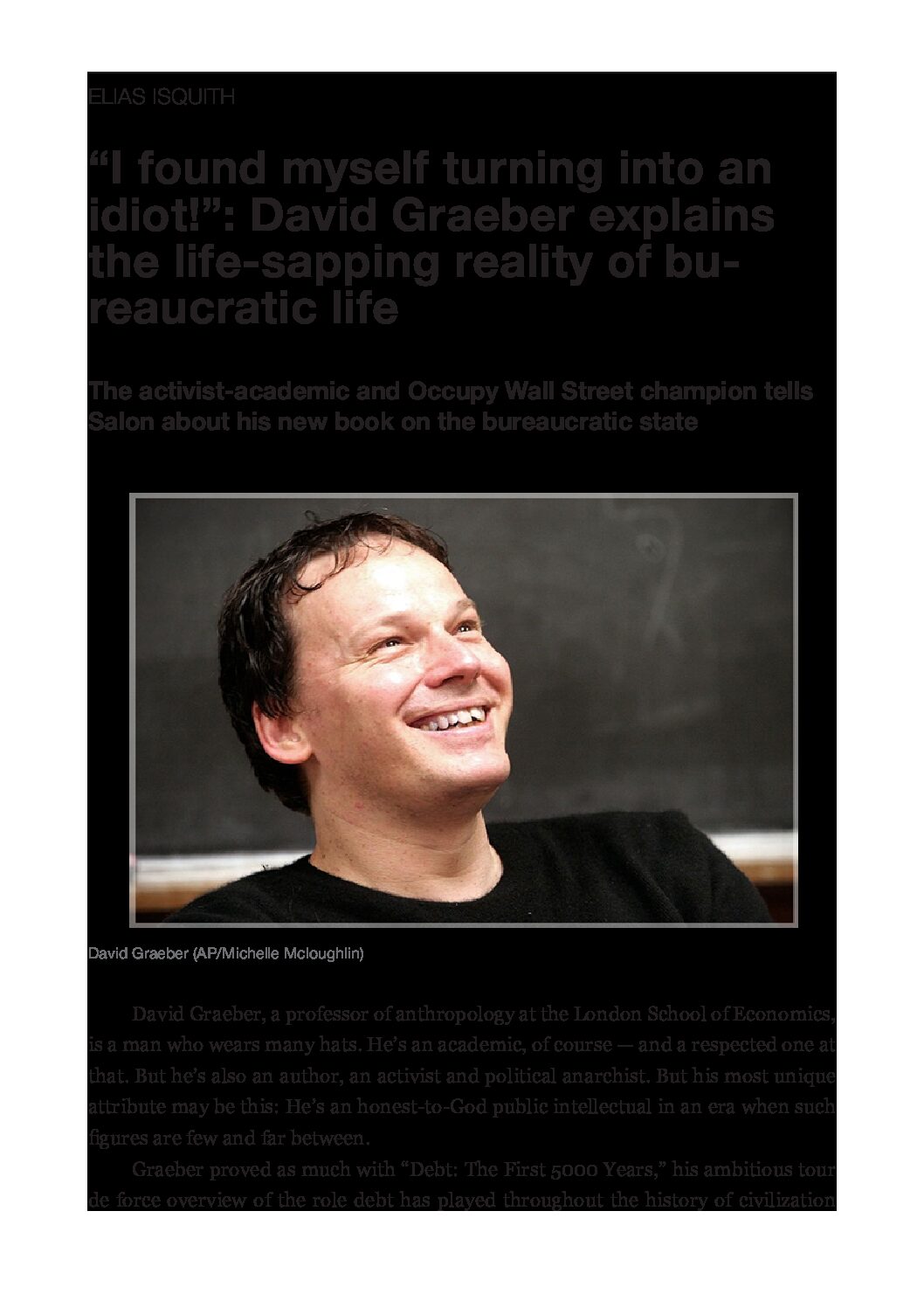 David Graeber, a professor of anthropology at the London School of Economics, is a man who wears many hats. He’s an academic, of course — and a respected one at that. But he’s also an author, an activist and political anarchist. But his most unique attribute may be this: He’s an honest-to-God public intellectual in an era when such figures are few and far between.

Graeber proved as much with “Debt: The First 5000 Years,” his ambitious tour de force overview of the role debt has played throughout the history of civilization and into the present day. And while it may be the case that, in the years since “Debt” was first released, Graeber has come to be best-known for his role within the Occupy Wall Street movement, he is still, fundamentally, a writer and a thinker who tries to grapple with some of life’s biggest and most unwieldy ideas. On that score, his latest release, “The Utopia of Rules: On Technology, Stupidity, and the Secret Joys of Bureaucracy,” stands as proof.

Recently, Salon spoke with Graeber over the phone to discuss the book and his views on the bureaucratic phenomenon. Our conversation also touches on why Graeber thinks it was a mistake for the left to abandon a more thorough critique of bureaucracy, how bureaucracy can be a response to a deep-seated, psychological need, and why it is that it so often makes us both act and feel, well, “stupid.” This interview has been edited for clarity and length and can be found below.

What was it that made you want to devote so much time to writing about bureaucracy?

I’d actually written a couple of these essays beforehand, but I realized that bureaucracy was sort of a theme that kept popping up in all sorts of different things that I was working on … Also there wasn’t a very interesting existing literature on it. Part of it comes from my academic work and my political work — both constantly bumping into themes of bureaucracy, and not having a book like that that I could read. (You often write books you would have liked to have been able to read.)

The more time went on, the more I realized [bureaucracy] was also politically important. The fact that the discourse of the way we talk about bureaucracy, the political issue of bureaucracy, used to be a big left-wing issue back in the ’60s, and now it’s sort of been abandoned to the right — I think the political consequences of that have been disastrous.

Nobody really likes it. It’s this kind of constant compromise in principles, which creates this [policy] mish-mash that basically nobody would come up with or promote as a program in itself. The very fact that people vote for these guys — Blair, Obama, etc. — at all just shows the enduring power of the appeal of leftist ideas. And because it’s a horrible program, the right-wing grabs all the popular rebellion votes.

So in terms of mixing the bureaucratic and the capitalist in a way that gets you the worst of both, the high-profile policy that came to my mind most immediately was the Affordable Care Act. Is that a good example?

Yeah, pretty much. You can’t tell if it’s public or private; and it’s partly government regulated profit-taking, forcing you into a profit-making enterprise [whether you like it] or not. And it creates completely unnecessarily complicated layers of bureaucracy.

This brings to mind a concept you call “the Iron Law of Liberalism.” Mind telling me a bit more about that and its significance?

There was this liberal fantasy in the 19th century that government would dissolve away and be replaced by contractual market relationships; that government itself is just a feudal holdover that would eventually wither away. In fact, exactly the opposite happened. [Government has] kept growing and growing with more and more bureaucrats. The more free-market we get, the more bureaucrats we end up with, too.

So I kind of looked around for a counter-example: Is there an example of a place where they did market reforms and it didn’t increase the total number of bureaucrats … I couldn’t find any. It always goes up. It went up under Reagan.

The idea that free-market policies create bureaucracies is pretty counterintuitive, at least for most Americans. So why is it the case that laissez-faire policy creates bureaucracy?

Part of the reason is because in fact what we call the market is not really the market.

First of all, we have this idea that the market is a thing that just happens. This is the debate in the 19th century: market relations creeped up within feudalism and then it overthrew [feudalism]. So gradually the market is just the natural expression of human freedom; and since it regulates itself, it will gradually displace everything else and bring about a free society. Libertarians still think this.

In fact, if you look at what actually happens historically, this is just not true. Self-regulating markets were basically created with government intervention. It was a political project. Certain assumptions of how these things work just aren’t true. People don’t do wage labor if they have any choice, historically, for example. So in order to get a docile labor force, you have to create police and [a] large apparatus to ensure that the people you kick off the land actually will get the kinds of jobs you want them to … this is the very beginning of creating a market.

Basically, we assume that market relations are natural, but you need a huge institutional structure to make people behave the way that economists say they are “supposed” to behave. So, for example, think about the way the consumer market works. The market is supposed to work on grounds of pure competition. Nobody has moral ties to each other other than to obey the rules. But, on the other hand, people are supposed to do anything they can to get as much as possible off the other guy — but won’t simply steal the stuff or shoot the person.

Historically, that’s just silly; if you don’t care at all about a guy, you might as well steal his stuff. In fact, they’re encouraging people to act essentially how most human societies, historically, treated their enemies — but to still never resort to violence, trickery or theft. Obviously that’s not going to happen. You can only do that if you set up a very strictly enforced police force. That’s just one example.

Stipulating that the bureaucratic state inexorably grows in response to free-market policy, why should it bother us? It’s annoying, sure; but are there costs bigger than that?

I really think that bureaucracy is a way of crushing the human imagination. It also makes people stupid. And that was the thing that really impressed me about my first major encounter with bureaucracy — I found myself turning into an idiot! I was filling out the form wrong, I was making the obvious mistake that anybody with any degree of intelligence wouldn’t do, and constantly being told: “But you did it wrong!” And that experience of wandering around and feeling like an idiot and incompetent in life, is the necessary clunkiness of living under a bureaucratic regime.

You also write in here, though, that there is a kind of appeal to bureaucracy, at least in the abstract. What do you mean when you say that?

Because it’s like a machine; you don’t have to worry about other people, you don’t have to do all that work of interpretive labor … you just press a button and things will appear. You can just go to the store and give them your money, and you don’t have to explain why you want this or why you need it. That’s a total separation of means and ends.

And on a deeper level … there’s this dream of a world where you actually know what the rules are, and that has a deep appeal. And this is why I called the book what I did. The phrase “Utopia of Rules” actually applied, when I first coined it, to games. Why do we enjoy games? Well, one reason we enjoy games is because it’s one of the only situations we ever experience in life, perhaps the only experience, where we know exactly what the rules are.

There’s always rules [in life], but usually they’re not spelled out; everyone has a slightly different idea of what they are, there’s all these ambiguities, it’s sort of complicated and then people break them all the time anyway. Life is this endless game of trying to figure out what the rules are and nobody quite understands. Then, [with bureaucracy], you create this imaginary situation, totally bounded in time and space, where everybody knows exactly what the rules are, people actually do follow the rules, and even people who follow the rules can win — which is very unusual in real life.

So there’s two fantasies or freedoms you can imagine: one based on play and one based on games. Play is like pure creativity; in fact, it sort of generates rules. It’s like the ultimate power. But pure creativity is scary on a certain level. On the other hand, pure rule-bound game is a stifle and boring. So there’s a kind of constant tension between those two principles that seems to play in every aspect of human existence. Bureaucracy is seizing on one of those impulses and riding it as far as it can go.